Tornado” – The Bike that gave the Company it’s name 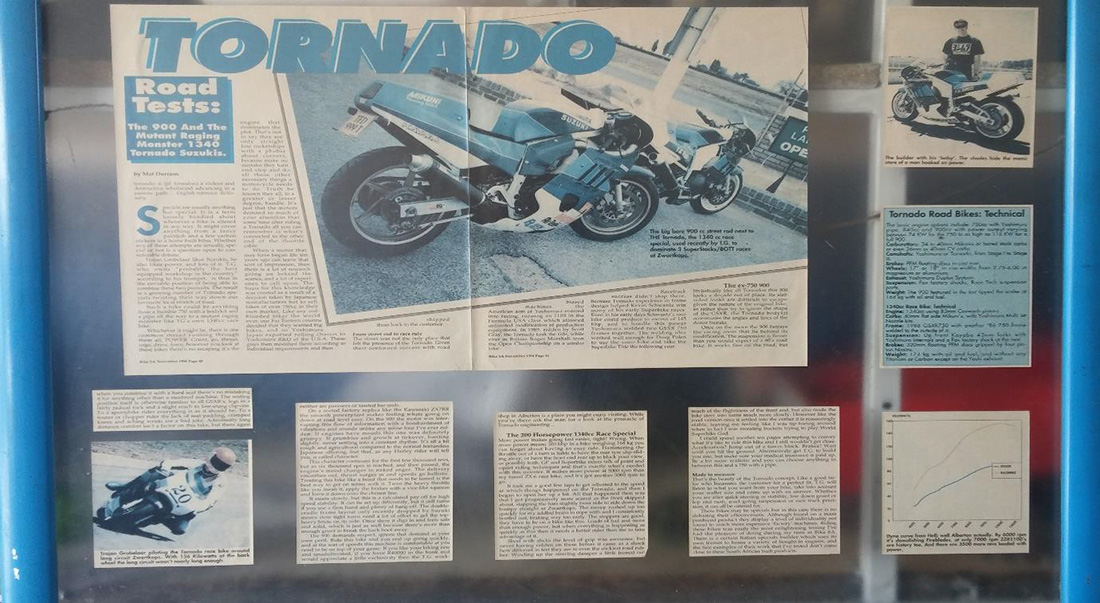 TORNADO – The Bike that gave the Company it’s name:
Bike S A article from November 1996 - written by Matt Durrans
Specials are usually anything but special. It is a term loosely bandied about whenever a bike is altered in any way. It might cover anything from a fancy paintjob and a few carbon stickers to a
home build Bitsa. Whether any of these attempts are actually special or not is a question open to considerable debate.
Trajan Grobler likes Suzuki’s, he also likes power, and lots of it. TG who owns “ probably the best equipped workshop in the country ” according to his trumpet, is thus in the enviable position of being able to combine these two pursuits. The result is growing number of Tornado specials twisting their way down our favourite local stretch of road. Such a bike could be anything from a humble 750 with a body kit and a pipe all the way to a mutant raging monster like TG’s own 1340cc race bike. Whichever it might be, there is one common thread running through them all, POWER, Grunt, go,
thrust, urge, drive, force, however you look at these bikes there’s no escaping it’s the engine that dominates the plot. That’s not to say they are only straight line rocket ships with a phobia about
corners, because make no mistake they turn and stop and do all those other necessary things a motorcycle needs to do. Truth be known they all, to a greater or lesser degree, handle. It’s just that
the motors demand so much of your attention that some time after riding a Tornado all you can remember is what’s connected to the other end of the throttle cable.

When a motor that may have begun life ten years ago can leave that sort of impression, then there is a lot of research going on behind the scenes, and a lot of experience to call upon. The basis for this
knowledge was created as a result of a decision taken by Japanese manufacturers not to sell bikes of over 750cc in their own market. Like any red-blooded biker the world over, our Far Eastern cousins decided that they wanted big bikes, and so Yoshimura Japan exported rolling chassis to Yoshimura R & D of the USA. These guys then modified them according to individual requirements and then
shipped them back to customer.

From street rod to race rule
The street was not the only place that felt the presence of the Tornado, given their continued success with road biased machines, the American arm of Yoshimura entered into racing, running an 1100 in the Formula USA class which allowed unlimited modification of production equipment. In 1989, ridden by Scott Gray, the Tornado took the title, while over in Britain Rodger Marshall won the Open Championship on a similar bike. Racetrack success didn’t stop there, because Tornado experience in frame design helped Kevin Schwantz win many of his early Superbike races. Even in his early days Schwantz’s race bike could produce in excess of 145 bhp, and to handle this power Yoshimura welded two GSXR 750 frames together. The welding idea worked well enough for Doug Polen to use the same bike and take the Superbike Title the following year.
The ex-750 900 Stylistically like all Tornado’s this 900 looks a decade out of place. It’s slab sided looks are difficult to escape given the nature of the original bike, so rather than try to ignore the shape of the GSXR, the Tornado body kit accentuates the angles and lines of the donor Suzuki. Once on the move the 900 betrays the racing roots that lie behind it’s modifications. The suspension is firmer than you would expect of a 90’s road bike. It works fine on the road, but when you combine it with a hard seat there
is no mistaking it for anything other than a race bred machine. The seating position itself is otherwise familiar to all GSXR’s, legs in a fairly radical tuck and a slight reach to low-slung clip-ons.
To a sports bike rider everything is as it should be. To a Tourer or Chopper rider the lack of seat padding, cramped knees and aching wrists are a bad joke. Admittedly long distance comfort isn’t a factor on this bike, but there again neither are panniers or tussled bar ends. On a sorted factory replica like the Kawasaki ZX7RR the smooth powerplant makes feeling what’s going on down at road level easy. On the 900 the motor was interrupting this flow of information with a bombardment of vibrations and sounds unlike any inline four I’ve ever ridden. If engines have moods this one was definitely grumpy. It grumbles and growls at tick over, hunting slightly, never settling into a constant rhythm. It’s all a bit rough and agricultural compared to the normal featureless Japanese offering, but that, as any Harley rider will tell you, is called character. This character continues for the first few thousand revs, but as six thousand rpm is reached, and then passed, the engine’s mood changes to naked anger.

The delivery smoothes out, thrust surges in and speeds go ballistic. Treating this bike like a beast that needs to be tamed is the best way to get on terms with it. Twist the heavy throttle like you mean it, apply the brakes with a vice-like squeeze and force it down onto the chosen line. It steers slowly, but this is a calculated pay off for high speed stability. It can be set up differently, but it still turns if you use a firm hand and plenty of hang-off. The double-cradle frame layout only recently dropped by Suzuki means slow tight turns need a lot of effort to get the top-heavy brute on it’s side. Once there it digs in and feels safe and solid, which is just as well because there’s more than enough grunt to break the back boot away. The 900 demands respect, ignore that demand at your own peril. Ride this bike and you end up going quickly, and at the sort of speeds this machine is comfortable at you need to be on top of your game. If you like your biking raw and unadulterated, if you have R40000 in the bank and would appreciate a little exclusivity then the TG workshop in Alberton is a place you might enjoy visiting. While you’re there ask the man for a look at the pinnacle of Tornado engineering...

The 200 Horsepower 1340cc Race Special
More power makes going fast easier, right? Wrong. When more power means 200 bhp in a bike weighing 164 kg you can forget about having an easy ride. Hammering the throttle out of a turn is liable to have the rear tyre slip-sliding away, or have the front end rear up to block your view, or possibly both. GP and Superbike riders talk of point and squirt riding techniques and that’s exactly what’s needed with this monster. It makes more power at 5000 rpm than my tuned ZX-6 race bike,
and it’s got another 5000 rpm to go. It took me a good few laps to get adjusted to the speed at which things happened on the Tornado, and then I began to open her up a bit. All that happened then was that I got progressively more scared as the front skipped about, slapping the bars slightly from side to side down the bumpy straight at Swartkops. The sweep rushed up too quickly for my addled brain to cope with and I consistently bottle out, braking way too early. The stoppers are good, they have to be on a bike like this. Loads of feel and more then enough power, but when everything is happening as quickly as this then it needs a better rider than me to take advantage of it.

Shod with slicks the level of grip was awesome, but never having ridden on them before it came as a shock how different in feel they are to even the stickiest road rubber. Winding up the steering damper a little ironed out much of the flightiness of the front end, but also made the bike steer into turns much more slowly. However like the road version once it settled into the corner it is reassuringly stable, leaving me feeling like I was tip-toeing around when in fact I was sweating buckets trying to play World Superbike God. I could spend another ten pages attempting to convey what it’s like to ride this bike and I still wouldn’t get close. Acceleration? Jump out of a tower block. Brakes?

Wait until you hit the ground. Alternatively get TG to build you one, but make sure your medical insurance is paid up. Be a bit more realistic and you can choose anything in between this and a 750 with a pipe.

That’s the beauty of the Tornado concept. Like a good tailor who measures the customer for a perfect fit. TG will listen to what you want from your bike, take into account your wallet size and come up with an answer. Whether you are after quick steering or stability, low down grunt or top end rush, road going suspension or race track precision, it can all be created for. These bikes may be specials but in this case there is no debating their effectiveness. Although based on a mass produced product they display a level of individuality not found in much more expensive “factory” machines. Riding these bikes was easily the most enlightening testing I’ve had the pleasure of doing during my time at Bike SA. There is a certain Italian specials builder which uses its own frames to house a variety of bought-in engines, and the two examples of their work that I’ve tested don’t come close to these South African build products.